Who’s business is it?…

Since the beginning of COVID, the shutting down of our economy by government mandates at multiple levels gave in to big government and big business and we gave up a bit of our freedom for the perception of safety. Fortunately, even big business is now speaking out.
What does it mean – Business leaders are starting to push back and reclaiming their businesses from the grips of unelected bureaucrats and elected officials with not a clue how the economy really works.

For example, many in the oil industry are mocking President Biden’s tweets on oil and gas. They are asking the intern or whoever approved the recent tweets to enroll in a basic economics class. Jeff Bezos openly disagreeing with the White House on inflation. Elon Musk has been at the front, leading the way and pointing out the hypocrisy in DC and lack of fundamental understanding of how business and the economy really works. Again, our President and most of his staff have never run a business or worked in the private sector. Sure, his team is from the Ivy league and sure, Harvard and Yale are great schools, but at some point, theory gets punched in the face and hard work and facts matter.

When the going gets tough, the answer is not Washington or some bloated government program. It is freedom. We just celebrated the greatest gift to the world. The United States of America. Prior to the U.S. most generations thought they would live just like their parents before them. Destined for serfdom and subjects of a government ruled by mans laws.

What we need are more Americans thinking things through on our own, with less rules, less mandates, less regulations, less bureaucracy getting in between you and the freedom to own your own destiny. Happy Birthday America. Take the moment to listen to 100-year-old veteran Carl Dekel. Listen to his pride, recognize his wisdom and passion for our country, and the fear he has for our future. Freedom is tough and even harder to keep. https://www.youtube.com/watch?v=wcnQJd_XRQQ

Four week moving average is beginning to slow.
What does it mean – Disturbing news for the job markets. Initial claims increased by 7,250 and continuing claims increased by 5,500. What is concerning is the improving trend we have seen for the last few months has stalled out. Job market may be tightening. 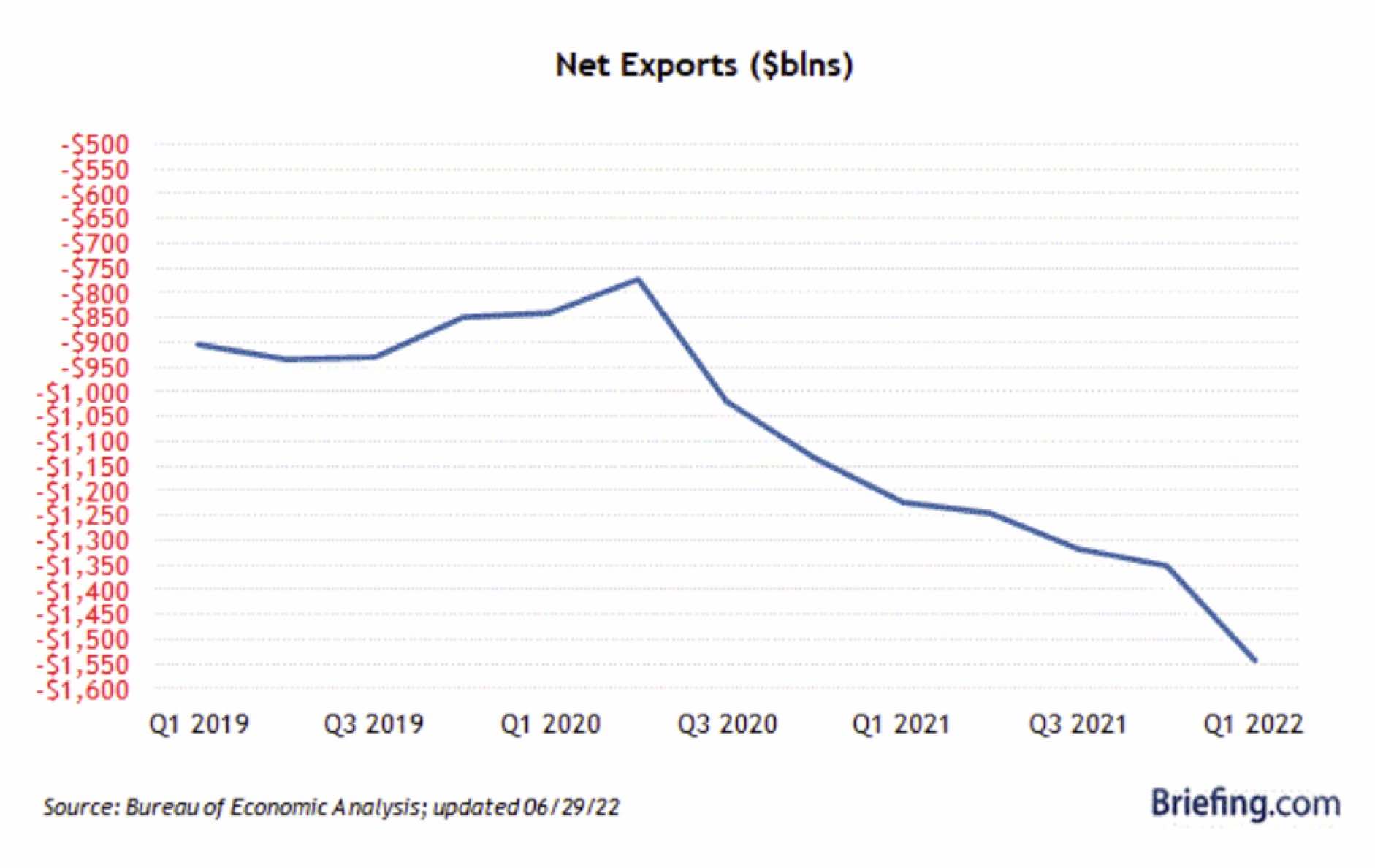 Net exports continue to slide – From the graph above you can clearly see the massive fall off.
What does it mean – It is a culmination of many issues. 1) Bad fiscal policy and slowly letting up on China. 2) As the Fed raises interest rates, our dollar become stronger, and our goods become more expensive. This is seen above and in the fact that imports where up 18.9% vs. 18.3%.

Total sales are down 8.6% from one year ago.
What does it mean – While existing home prices nationally are up 14.8% year-over-year, representing 123rd consecutive month of year-over-year growth, which is the longest-running streak on record. It is also the first time the median price went above $400,000. The markets have been on a terror and nationally hitting new records. While still a tight market, the west coast was down 5.3% and folks looking to lock in gains and move to low tax states from CA are hitting the bid.

If you live in CA, your local water district issued a warning if you use to much water. You will be penalized, and they will send you to water jail!!! Not really, they will just dox you and make sure your neighbors know how evil you are and put a governor on your water main. Ok, maybe not dox you. But they will limit your water.

As a CA resident and an American, I am sick of being told what I can and can not use. If I want to pay for it, then it is my choice. My decision and yours too. Seems to work for Obama in Palm Springs, Hawaii, DC, and now his fourth home in the Hamptons. Or how about our climate czar, John Kerry, who travels the world on private planes and uses more energy and water than most the folks on his block combined. Or how about Governor Newsom and his wine vineyards wine vineyards which were miraculously allowed to stay open while everything else shut down in 2020. I am sure he is getting whatever he needs. I can guarantee you they are living by different rules than you and I.

Here is the real science. Since records began in 1895, statewide annual precipitation has ranged from a low of 9.4 inches in 1924 to a high of 41.66 inches in 2017. According to the California Office of Environmental Health Hazard Assessment and the chart below it sure looks like we are tracking just as we have since the beginning of keeping records. Folks, we do not have a water problem. We have a government problem. Just like Smokey the Bear said, “Only you can prevent forest fires”. The same can be said about CA. Keep electing what we have had for the last 30 years, and you will get more of the same. Less water, less energy, less farming, fewer jobs, more homeless, more crime, more waste, more corruption, and less accountability. Are you picking up what I am putting down? 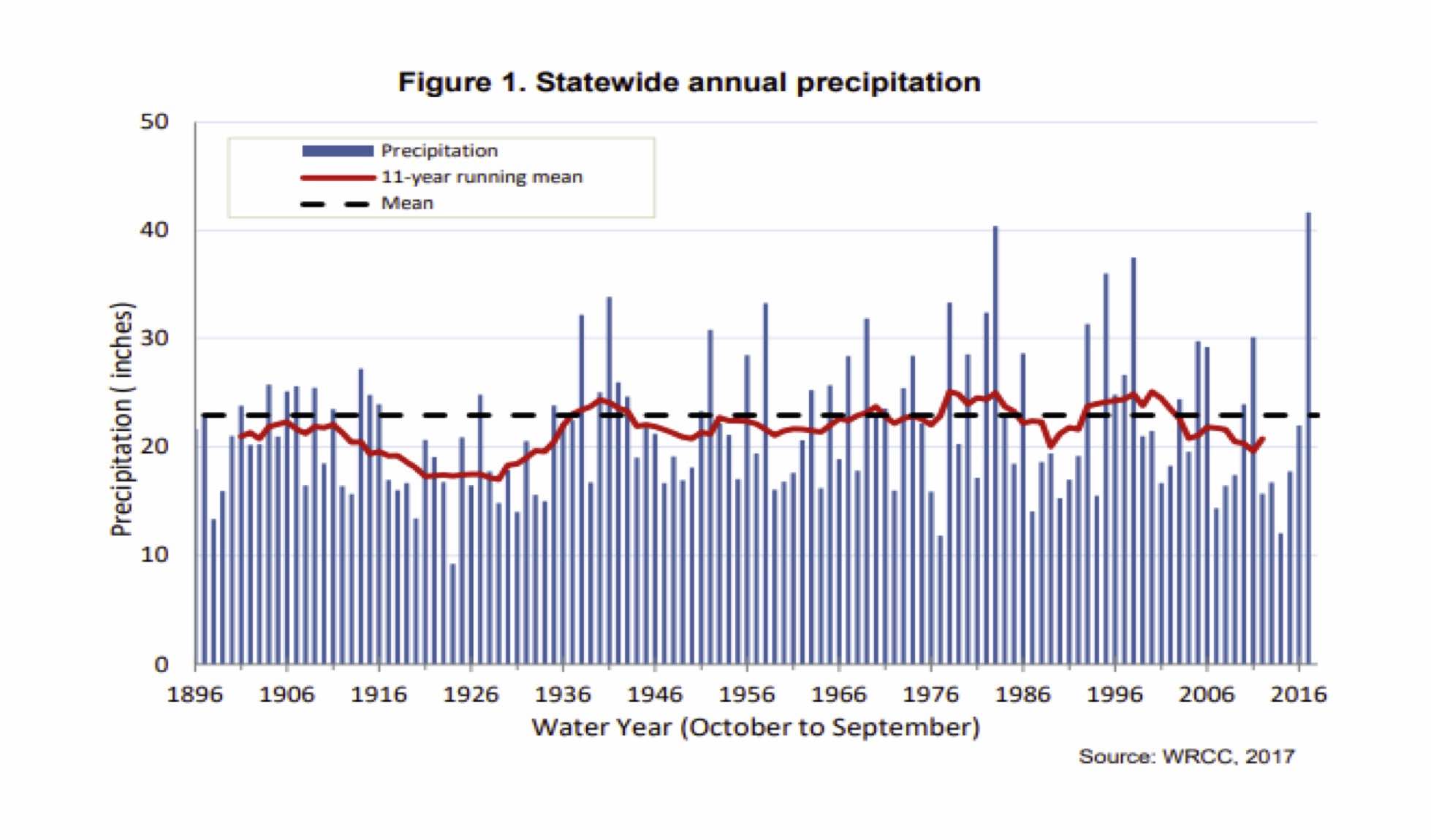 In CA, we have nearly 8 million people here illegally that we know of. We are building massive amounts of low-income housing that is being pushed by the federal and state governments on local municipalities by holding them hostage for state and federal grants, all while we have a “water shortage”. Ask yourself why? What we have is to many people attracted to our state for free handouts. California just announced they are going to give out a $1,000 to people to help fight inflation. Ahhhh, that is inflationary.

Bad policy is what is wrong. It is not a drought issue it is a planning issue and the greed of government officials who live off the property tax, planning fees, and permitting fees to fund their pet projects and secure enough votes to stay elected are driving the bus (over the cliff). Enough is enough. The reality is we have roughly the same rain and snow fall year over year on ten year rolling averages. Yes, we have droughts. Most of CA qualifies as a desert. But for some reason, God sees fit to fill our dams and rivers and aquafers even when we tear them down for the delta smelt, a frog, a bird or what ever else we deem irreplaceable and can be justified by “climate change”. What we need is CA government change.