Job market continues to be tight and still on the mend.
What does it mean – The key takeaway from the report is twofold: first, the initial claims level is still a long way from pre-recession levels; and secondly, this report covers the week in which the survey for the August employment report was conducted. The low level of initial jobless claims supports expectations for continued strength in nonfarm payrolls, which of course should support continued tightening moves by the Federal Reserve.

Yet, the US still has more people unemployed and a lower participation rate since the forced shutdown.
What does it mean – Per the graph below we saw real wages increase from 2017 to the beginning of the pandemic and fewer people working more than one job. Since the pandemic and the forced shutdown more and more people are forced to work more hours to keep up with inflation thanks to abysmal monetary policy via the increase of the money supply, combined with reckless fiscal policy through endless increases in government spending. 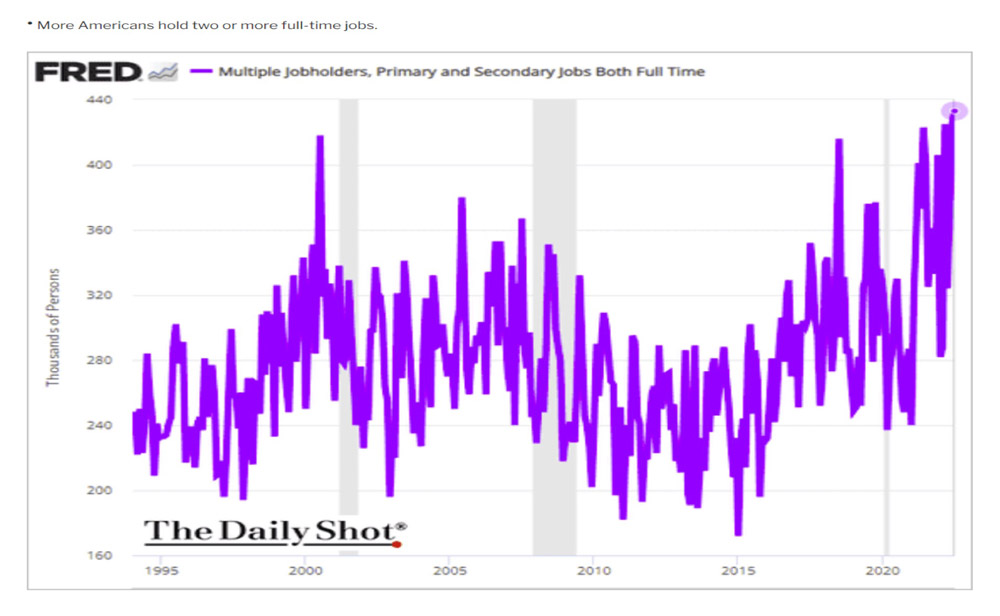 All about the jobs…

According to the latest PriceWaterhouseCooper (PWC) half of U.S. companies are planning to cut jobs, even as business leaders fret about difficulties hiring and retaining talent
What does it mean – From the song Pompeii by Bastille, “Grey clouds roll over the hills
Bringing darkness from above.” Businesses are now starting to feel the pinch of inflation, higher wages, a messed-up supply chain, the cost of government intervention, etc. I could go on and on, but you get the drift. The only sector that’s booming despite it all is government along with its 87,000 new IRS agents. What we need is a bill passed by both the House and the Senate that limits salaries for DC to the national or state average in average in which they are stationed.

Sales also decreased the most in 20 years.
What does it mean – Housing is slowing down. Cost of living, increasing interest rates, and now the Inflation Reduction Act will force you to pay more, your hope of moving up is now just hoping you can stay. Increasing corporate taxes and increasing the size of government will surely increase the cost of government to us all.

England and the Eurozone…

Inflation is a global issue.
What does it mean – Like the United States, energy is paramount to a strong economy and low inflation. Take it away and make it less dependable, and more expensive and the cost of everything goes up. 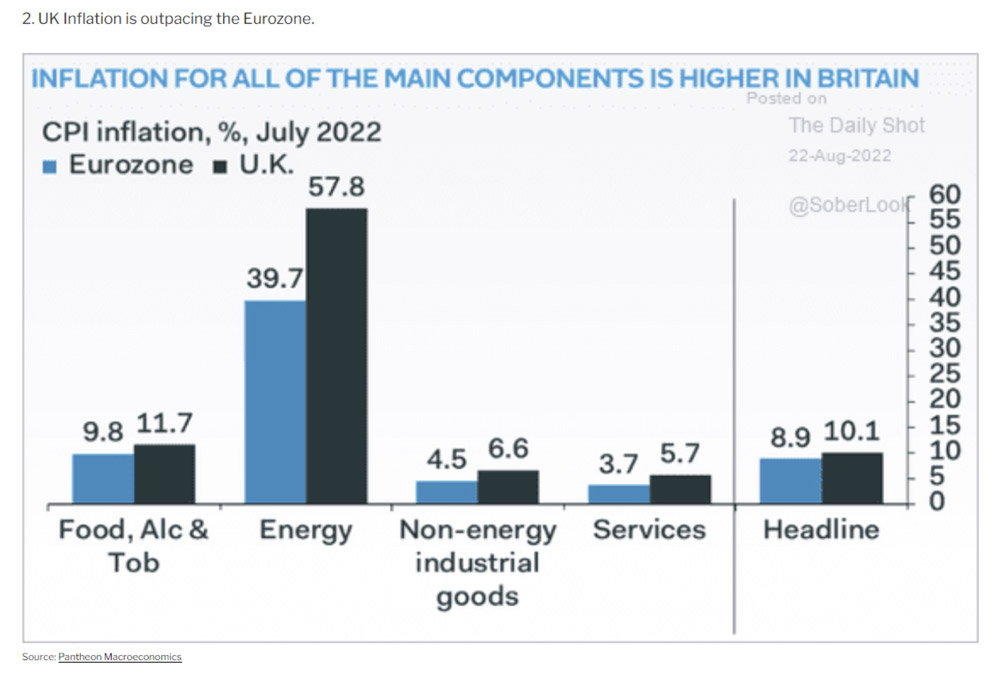 We are all enjoying a few cents savings, but why? Demand destruction.
What does it mean – Economists and business leaders have been warning about Demand destruction for some time. Once prices get too high, people stop using or look for substitutes. Consumer demand for energy has shifted as prices have increased substantially and the government has reduced the ability to process and refine crude and natural gas to keep up with needed demand. Demand destruction is exactly what is happening to the oil price as consumers are starting to use a bit less. With no help from the government drilling or begging won’t change the availability if the government continues to shut down refineries due to the added increase of regulations under this administration. Enjoy the price reprieve in gas while we have it. If we do not change policy, prices are heading back up.

You can’t make this stuff up!!

According to CNBC, Starbucks asks labor board to suspend mail-in ballot for union elections, alleging misconduct in voting process.
What does it mean – HMMM-The very company and CEO who promoted mail in balloting on our national election is finding out the truth about voter manipulation and how fraudulent mail-in balloting is the hard way. If passed and Starbucks becomes unionized, I wonder what that will do to the cost of a cup of coffee. Your venti vanilla latte won’t get any cheaper, that’s for sure. I am sure earnings will struggle and we will have to change the name from “three bucks” to “six bucks”. Not to mention due to their support for BLM and ANTIFA, they are now being forced to close many stores in cities ravaged by crime, homelessness, and bad city politics run by left wing DA’s, Mayors, and Governors who let criminals free and homeless destroy the culture and fabric of their once safe cities and states. Look no further than CA, IL, NY, NJ. All seeing Starbucks closing shops along with many other national chains like CVS, Walgreens, Walmart, etc. In Beverly Hills, the boutique chain Kitson just banned masks. Apparently, the robbers and thugs are using the mask mandates as ways to circumvent the rule of law and hide their faces from cameras. Wow…who would have thought? Every store owner in America complained about this and now business and the safety of staff, clients, and innocent bystanders suffers under the fear mongering of the federal, state and local governments.